Everything you need to know about DAO 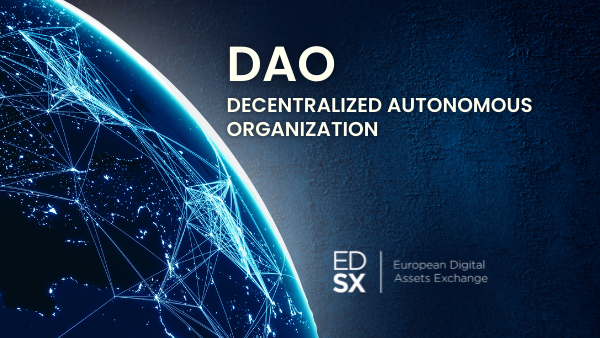 Inspired by the decentralization of cryptocurrencies, a group of developers came up with the idea for a Decentralized Autonomous Organization – better known as DAO – in 2016.

What is a DAO?

DAOs represent an effective and safe environment to work with people with akin minds around the globe. It’s basically an internet-native business that’s collectively owned and managed by its members.

Why are DAOs necessary?

Starting an organization with someone that involves funding and money requires a lot of trust in the people you’re working with and trusting someone met on the Internet is often controversial.

With DAOs, people who wish to connect just need to trust the DAO’s code, which is 100% transparent and verifiable by anyone: it’s clear that this new approach opens up many new opportunities for global collaboration and coordination.

A comparison: DAO vs A Traditional Organization

If an organization is a charity: can accept membership and donations from anyone in the world and the group can decide how to spend donations.

For a freelancer network – it’s possible to create a network of contractors who pool their funds for office spaces and software subscriptions.

In case of Ventures and Grants – it’s possible to create a venture fund that pools investment capital and votes on ventures to back. In addition, repaid money could later be redistributed amongst DAO-members.

Usually fully permissionless, depending on the token used. Mostly these governance tokens can be traded without permission on a decentralized exchange, others must be earned through providing liquidity or some other ‘proof-of-work’.

Either way, holding the token grants access to voting. It is that simple.

Share-based DAOs are more permissioned, but still quite open. Any prospective members can submit a proposal to join the DAO, usually offering tribute of some value in the form of tokens – or work; the direct voting power and ownership are represented by shares Members can exit at any time with their proportionate share of the treasury.

Specifically, how do DAOs work?

The base are smart contracts. The contract defines the rules of the organization and holds the group’s treasury; once the contract is live on Ethereum, no one can change the rules except by a vote any action that exceedes the rules and logic in the code, fails.

Because the treasury is defined by the smart contract as well, it means no one can spend the money without the group’s approval: DAOs, in fact, don’t need a central authority since the group makes decisions collectively and payments are authorized automatically when votes pass.

This is possible because smart contracts are tamper-proof once they go live on Ethereum – since everything is public, it’s impossible to change something in the code without someone noticing.

What’s the correlation of Ethereum and DAOs

Ethereum is the perfect foundation for DAOs: Ethereum’s own consensus is distributed and established enough for organizations to trust the network.

Smart contract code can’t be modified once live, even by its owners, which allows the DAO only to run by the rules it was programmed with.

Given that, it has to be said that the Ethereum community has proven to be more collaborative than competitive, allowing for best practices and support systems to emerge quickly.

What is the future of DAO?

Initially, the DAO had not returned as of mid-2020; nonetheless, interest in decentralized autonomous organizations as a broader group continues to grow.

In 2021, The Maker Foundation, an icon in the crypto industry as the original champion of DAO, announced that it was officially turning operations over to MakerDAO (creator of the DAI stablecoin) and would dissolve by the end of the year.

While there are many lingering concerns and potential issues regarding legality, security, and structure, some analysts and investors believe that this type of organization will eventually come to prominence, perhaps even replacing traditionally structured businesses for good.

What do YOU think of it?
Discuss it with us on our socials!