The path to adoption for blockchains in capital markets requires clearing a number of hurdles as our experience in developing EDSX clearly shows. The technology requires further development to be truly scalable, as well as common standards to be agreed. As we are not certain about the future direction we have inbuilt sufficient flexibility and modularity in our solution both from information and financial point of view. This is the only solution to tackle and make use of uncertainty at this stage.

Sufficient investment is needed to develop applications and run implementation programmes. We have brought a pack of partners along to be able to cover the whole spectrum of issues. An industry unaccustomed to cooperation will need to reach agreement on a wide range of challenging issues regarding implementation and the best way to approach this is to speak all current, potential and future participants be they competitors or collaborators. Below, we outline six major areas that need to be addressed before widespread adoption will become feasible.

Blockchain technology remains nascent, even if it is developing rapidly. Questions over the scalability and throughput capacity of blockchains are starting to be successfully answered, with leap improvements over the original Bitcoin platform, although the current standard of technology remains some way behind the levels required to support adoption in legacy capital markets. Much larger datasets will need to be handled if mass adoption is to happen and if any core part of the capital markets system is to be replaced. Moreover, there are very high standards set for the security, robustness and performance of blockchains used for major industrial purposes. Integration with existing non-blockchain systems (such as risk management platforms) will also be a requirement for the foreseeable future. At EDSX we have adopted and ported into the system the best available practices and security concepts. Hence we can say, we have an industrial level system, which yet is to be tested for transaction loads.

Disrupters in other industries have adopted an ‘act first, seek forgiveness later’ approach to regulation. Innovations in financial markets, however, require the explicit blessing of regulators well ahead of time. New regulatory principles may be needed where blockchain technologies become an integral part of the market infrastructure, and where consensus protocols are run through an international network of nodes. For example, the responsible parties for system integrity would need to be decided.

A considerable number of aspects of law will also need to be reinterpreted or changed through primary legislation. Switzerland is an excellent place in this respect as it is at the forefront of legal frame development. These issues include the legal definition of the finality of settlement which presupposes existing market processes and central data sources. Similarly there currently exist geographic territorial requirements concerning where data is physically maintained as golden source, a concept that does not fit with copies of the ledger being distributed to nodes on a global basis. Finally, as the mechanisms currently stand, records are irrevocable once entered into a blockchain, and amendments require changes to all subsequent blocks. This is one of the inherent security features of the blockchain concept. However, this has implications for judicial interventions in the event of disputes or outcomes of other legal proceedings. Regulators will not accept a mechanism that prevents their lawful intervention. Therefore, the design of the system needs to incorporate features (at least for financial instruments ) that allow for a change in ownership to be enforced in the absence of compliance with the existing owner. EDSX has already allowed for judicial and other government interventions as required by law. So far, several regulatory bodies have expressed interest in blockchain technologies. Because they see the potential to reduce inefficiency and costs, they are ostensibly keen to work with the industry. 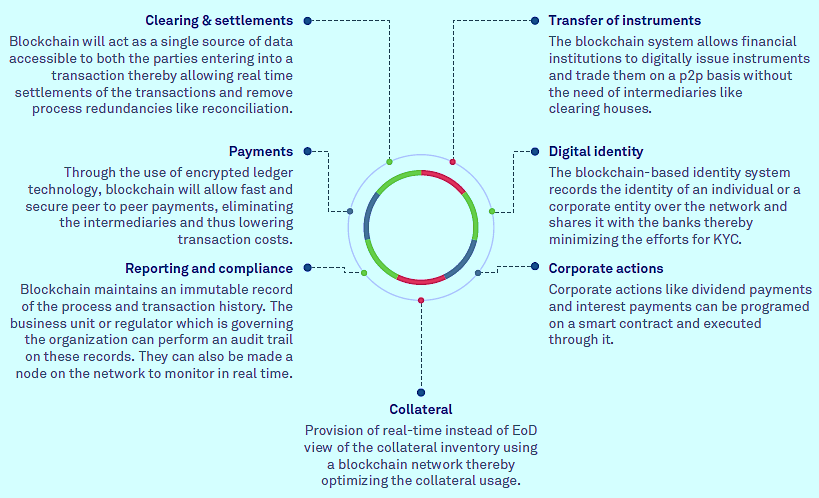 Need for a robustness

Short of fiat currency being recorded on a blockchain (as the Bank of England has already imagined in a research paper), an interoperable cash ledger will require some intermediary step. The inability of existing cryptocurrencies to be perceived as stable sources of value will need to be tackled. There are a number of ways to innovate in this area, but fundamentally, cash would be just another asset class on a ledger. Commercial enterprises could create specific cryptocurrencies for interbank use (with a permanent par value, and underpinned by near risk-free or escrowed cash holding). Another, simpler way, is to use existing accounts at banks where participants deposit liquidity for trading in segregated accounts, with changes to the cash ledger reflected on the balance in their trading account.

Industry alignment will be required on certain design points, such as: whether systems are completely open (as with Bitcoin) or use permissioned-base access requirements (as the case with EDSX); the principles for suitability in interacting with the ledger; and the interoperability between different networks, which may potentially run different consensus protocols and safeguards against coding errors, creating unforeseen knock-on effects (particularly with smart contracts). These will all be important to agree and enshrine in the initial scoping of new systems and standards for interoperability. There will need to be clear agreement on how blockchains will be managed and improved once they are live. This would involve governance processes, update approvals, roles and responsibilities, and so on.

Operational risks come into play through the adoption of new technologies, either by running parallel infrastructures whilst disruptive solutions grow, or from more substantive ‘lift and shift’ migrations. A significant amount of work will need to go into ensuring that these operational risks are minimised. The risk of technical failure during implementation will require participants to be able to recover quickly, or be able to revert to the traditional ecosystem as a fallback. EDSX maintains a centralized inhouse queue (and parallel copies of it) for all transactions made on its platform as a fall-back scenario.

Anonymity is a critical requirement for many processes in capital markets. Cryptography could go a long way in protecting anonymity in a blockchain. However, it will require meticulous key management records, maintained separately from the blockchain for each participant, to decrypt and reference back the entries they hold an interest in. Furthermore, the ability to reveal selective information to counterparties for credit assurance, for instance, makes it extremely difficult to prevent errors that result in major data breaches. And overarching all these considerations is the question of how to link cryptographic identities to real world identities. Some people envisage Know Your Customer (KYC) assessment to be a responsibility of the validation nodes in a permissioned network. Others imagine a more far-reaching change, where identity management is a service offered independently of data validation. In addition, there is a degree to which regulators are likely to require perfect views of unanonymised data in the ledger in order to perform adequate market surveillance and maintain anti-money laundering and anti-terrorist financing processes.